With the South Asian Association for Regional Cooperation (SAARC) effectively sidelined politically, a number of mechanisms under its purview that were mandated to address cross-border disasters have also taken a hit. Against such a backdrop, this Research Commentary (RC) brings in focus the recurring flooding that seriously disrupt livelihood in South Asia and has claimed the lives of 2000 people on an average in the past 2 decades every year. This RC underlines that there is no way around cross-border infrastructure, or at least a transnational system of regulations on the rivers, with an emphasis on digital infrastructure that allows for information sharing between concerned government. It provides suggestions on what could be done at both the regional and national level and concludes that meaningful action can be made through cross-border digital infrastructure that keeps at the centre a three-layered mapping-approach (described in detail below).

Rivers have nurtured all major civilizations, but they have also brought immense misery to dwellers living along them during floods. Today, millions of farmers along the Ganges basin keenly welcome the monsoons for irrigation every year. But recurring flooding is an inherent feature of this part of the South Asian landscape, which has claimed 2000 people on an average in the past 2 decades every year.

The magnitude of this recurring disaster is informed by both the number of people it affects and the intensity of the damage it brings (paralyzing an entire region). Even though it is anticipated almost every monsoon, governments have failed to address it in any meaningful manner, giving this crisis the distinction of a typical wicked problem.

In August 2017, South Asia witnessed the worst floods in decades, affecting nearly 45 million people. A reported 16 million in urgent need of basic life support were children. This RC documents a cross-border natural disaster that escalated into a humanitarian crisis largely due to the failure of the respective governments to collaborate and respond effectively. Although, it should be acknowledged that, while the floods are usually anticipated, its magnitude is usually unknown.

Source: Office for the Coordination of Humanitarian Affairs (OCHA). As of September 01, 2017 (People affected- in millions)

On September 2, Red Cross announced it was the worst flood facing South Asia in 4 decades, with 1/3rd of Bangladesh submerged. The river and its numerous tributaries that flows from the Himalayas downstream into India and Bangladesh (that has an average elevation of 85 meters above sea level) are forces to reckon with. Further, with destruction of millions of hectares of agricultural lands, while it severely affected food security locally, it also had the potential to disrupt global rice supply chain.

The costs on society

In southern Nepal, northern India, and Bangladesh, the floods inundated thousands of villages, natural habitats, hospitals, and schools. As one of the densest and impoverished regions in the world, people were rendered acutely vulnerable immediately. Evidence suggests that recurring natural disasters perpetuate chronic poverty . Take for instance, the head-count ratio of poverty are consistently found to be higher in flood-prone areas in Bangladesh. The floods pose a serious challenge to development efforts, as they have to operate at the face of immense uncertainty. Sure, the world is increasingly uncertain to natural disasters, but the worst crises such as these occur when governments are inefficient to respond, largely due to absence of necessary infrastructure in place.

While there is little scope to preventing the floods itself from occurring, the focus of policy can certainly aim to decrease vulnerability of affected population. To be fair, trans-boundary issues are inherently complex, especially when the policy agenda pertains to bringing together massive infrastructural undertaking. With multiple bureaucracies, interest groups, ambiguities in national responsibilities, contradiction between multiple national and international legal frameworks etc. coherent response to trans-national disasters are challenging. The political-economy of water issues is all the more sensitive because rivers not only accrue multitudes of benefits to nations but are also subjected to concerns of national security- associated with food and state stability itself.

a. To have policies that have a cross-border infrastructure component to them:

Traditionally, disaster management has been under the purview of national governments (Water, Ecosystems and Energy in South Asia Making Cross-Border Collaboration Work- ICIMOD). Against a backdrop of political distrust in the South Asian neighborhood between countries, governments find it difficult to collaborate on any issue.

To break this practice of governments working in solos, there needs to be a shift in how each government perceives the shared-ecosystem and disasters emerging from them. For instance, when the scope of one country’s policy with regard to managing rivers is sharply limited right where its own national territory ends, the shift is approaching these issues for policies could change.

Along these lines, the idea of desecuritization of the South Asian rivers looks promising. Researchers are oftentimes denied data in the name of national security. For example, in India, data on Indus, Ganges, and Brahmaputra rivers is considered classified information. Working in silos to manage rivers purely along national-territorial lines will only expose one’s own citizens to disasters.

The grounds for effective cross-border responses starts well-before the floods occur. Since the South Asian Association for Regional Cooperation (SAARC) is highly dysfunctional, an apolitical institution exclusively dealing with disaster management could be established. This will open up possibilities for seamless cross-border data and risk sharing mechanisms, early warning systems, and harmonized national and regional planning etc. Clarity of responsibilities pertaining to the management of shared eco-systems will only be achieved through such an institution, which can clearly designate governments their share of duties.

Polices based on localized socio-economic and demographic data

It is often argued that crisis after natural disasters is engendered by poor housing planning and land use codes, and inefficient early-warning systems. To accurately target the affected population, inputs for national policies must be based on localized socio-economic and demographic data. The WB suggests a three-layered mapping-approach that can precisely inform policy so it is capable of mitigate vulnerabilities of the affected effectively. Hazard, exposure, and vulnerability mapping are useful information for policy makers and individuals affected. This underscores the need for an integrated a robust digital infrastructure where information between governments are shared transparently.

Due to the inherent landscape of the South Asian region, floods have a deterministic element to them. The magnitude of effect of climate change on recent torrential monsoon is debatable, but rapid retreat of the Himalayan glaciers (referred to as the ‘water tower of Asia’ that feeds 1.3 billion people) can be attributed to rising global temperatures, which will bring more floods in the Ganges basin. If policy is primarily geared towards finding ingenious ways to mitigate vulnerabilities of the distressed during disasters, populations are known to be resilient in the long run to improve their own life outcomes. There may not be a better way to mitigate vulnerabilities than cross-border collaboration with digital infrastructure at the heart to promote better data and risk sharing mechanisms, early warning systems, and harmonized national and regional planning. When the problem at hand is cross-border in nature, it is only logical that South Asian governments avoid working in silos. 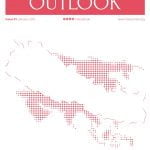 NRC0009 – Internet at 50: Opportunity for Nepal to Examine Past Impacts of the Internet and Plan for the Future