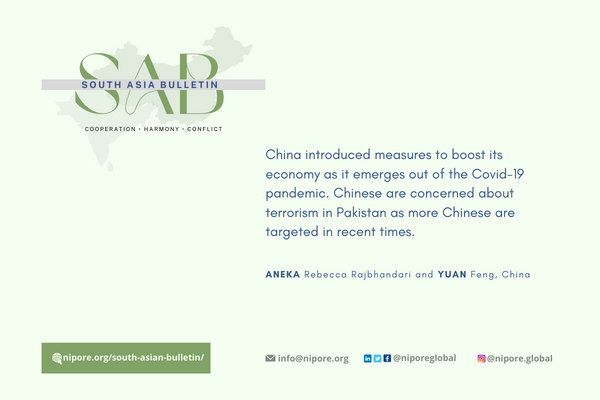 Shanghai gears up to lift restrictions and resume regular daily operations from 1 June. China has taken a ‘zero tolerance’ approach to control the Covid-19 pandemic, locking millions of residents in pandemic-hit areas. The Chinese economic outlook is bleak because of the pandemic. Chinese Premier, Li Keqiang, held a massive video conference among provincial and local governments to revitalize the Covid-19-impacted economy. China introduced several measures to meet its 5.5 percent GDP growth target. It includes stimuli like handing Shenzhen 300 million digital money (RMB) to residents,  adding 40,000 non-commercial vehicle licenses to the total quota for this year, and 10,000 RMB worth of subsidy for replacing old cars with electric cars in Shanghai.

On 19 May, Premier Li attended the Symposium on the 70th Anniversary of the China Council for the Promotion of International Trade (CCPIT) in Beijing. The CCPIT has significantly strengthened the bond between Chinese and foreign businesses and promoted international economic and trade exchanges.

The 6th Hong Kong Chief Executive (CE) election, the highest office of the Hong Kong Special Administrative Region (HKSAR), was held on 8 May. The former Chief Secretary for Hong Kong and former Security Secretary John Lee Ka-Chiu were elected. The election was the first after the implementation of the national security law for HKSAR. His election indicates that Beijing views HKSAR increasingly through a security lens.

Following a suicide bomb blast that took the lives of three Chinese teachers at the Confucius Institute in Pakistan, Premier Li held a call on 16 May. He raised concern over the act of terrorism.

Coinciding with the 71st anniversary of Sino-Pakistan relations, Pakistan’s foreign minister Bilawal Bhutto Zardari made an official two-day visit to China in late May. It marked the first high-level in-person interaction between the two countries since former Prime Minister Imran Khan was ousted. Talks focused on reviewing bilateral relations, emphasizing economic cooperation and progress on China-Pakistan Economic Corridor (CPEC) and the Belt and Road Initiative (BRI).

China marked the first cross-border RMB direct investment business in Nepal with 750,000 RMB worth of investment funds remitted to Nepal by the Tibet Regional Branch of the Bank of China. With the launch of RMB in direct investment, China continues to promote its currency among the BRI members.

China has offered to lend “a few million dollars” to help crisis-stricken Sri Lanka purchase essential goods. However, the West accused China of ‘debt-trap diplomacy’ and forwarded Sri Lanka as the poster case. While China has been slow to come to Sri Lanka’s rescue, China only accounts for 15% of Sri Lanka’s debt. Meanwhile, the China-backed Asia Infrastructure Investment Bank (AIIB) has also approved a loan worth $250 million to Bangladesh for post-COVID-19 pandemic recovery.

China is currently building a bridge across a lake on China’s Himalayan border with India, which the Indian government has already condemned as “illegal construction”. On 31 May, China and India discussed the border and security issues virtually, and China vouched for a friendlier business environment for Chinese businesses in India.

On 9 May, State Councilor and Foreign Minister Wang Yi virtually attended and addressed the opening ceremony of the High-Level Virtual Meeting of the Group of Friends of the Global Development Initiative (GDI) in Beijing. China pledged to enhance consultation with other emerging markets, step-up support for the South-South Cooperation Assistance Fund and China-UN Peace and Development Fund, establish a pool of GDI projects, and support countries in exploring suitable development paths.

On 16 May, Shanghai Cooperation Organization (SCO) members participated in a four-day counter-terrorism meeting, including delegations from India, China, Pakistan, and other SCO member countries. The SCO’s Regional Anti-Terrorist Structure (RATS) meeting is in New Delhi, India, which Chinese experts commended as a sign of effort towards regional stability and security. Chinese citizens have been targets of terrorist groups in Afghanistan in recent times.

On 19 May, BRICS released a joint statement on “Strengthen BRICS Solidarity and Cooperation, Respond to New Features and Challenges in International Situation”. Brazil, Russia, India, and South Africa met virtually under Chinese leadership. They expressed commitment to working together to ensure the success of the 14th BRICS Summit. During a Ministry of Foreign Affairs (MoFA) press conference on the same day, Zhao Lijian, spokesperson of the MoFA, condemned the US government’s Tibet envoy, Uzra Zeya’s meeting with the Dalai Lama. He urged the US to refrain from “using Tibet-related issues to interfere in China’s internal affairs”.

The United Nations High Commissioner for Human Rights, Michelle Bachelet, wrapped up her six-day visit to China, including its Xinjiang region. China hosted a UN High Commissioner for Human Rights for the first time in 17 years. Chinese President Xi Jinping virtually met with Michelle on 25 May in Beijing. The High Commissioner’s Office expressed willingness to enhance communication and explore cooperation with the Chinese side to make joint efforts for international human rights progress. Ding Xuexiang, Yang Jiechi, and Wang Yi (in Guangzhou) were the meeting attendees. However, western leaders and media criticized Bachelet’s visit to China.

Wang made a diplomatic tour of the Pacific Islands countries (PICs) and visited eight countries, including Kiribati, Samoa, Fiji, Tonga, Vanuatu, Papua New Guinea, and East Timor in ten days. This follows the first foreign ministers’ meeting (virtually) between China and PICs last year. He jointly chaired the second foreign ministers’ meeting in Fiji, during which both sides reached a new consensus to deepen cooperation on sectors including poverty alleviation, climate change, and agriculture. Wang urged Australia to stop viewing China as an adversary. On 24 May, Quadrilateral Security Dialogue (Quad) announced a USD 50 billion infrastructure aid and investment in the Indo-Pacific region over five years to maintain a “free and open Indo-Pacific”. The Quad sees this as an alternative to China’s BRI. Following the Quad summit in Tokyo, Wang Wenbin, a Chinese Foreign Ministry spokesperson, criticized the group for threatening peace, stability, and cooperation and claimed that it “runs counter to the trend of the times and is doomed to be rejected.”