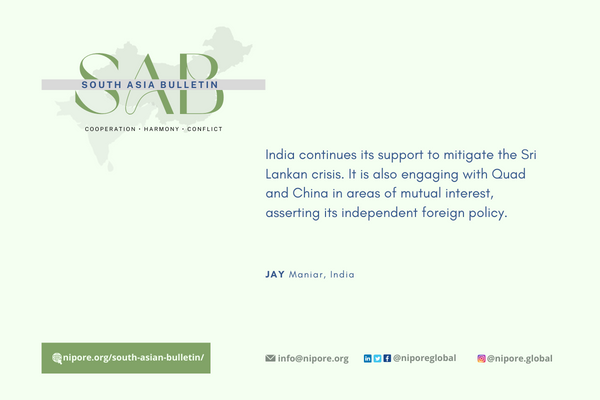 In late May, India announced a ban on wheat exports. New Delhi intended to secure the supplies for the nation amidst rampant inflation and a disrupted global supply chain caused by the Russian invasion of Ukraine. India accounts for just one percent of global exports and thus has only a regional impact. India banned the exports of sugar earlier. It has not yet banned rice exports and is considering exporting wheat to select regional nations.

India continues to face a slow but steady ‘fourth wave’ of the novel Coronavirus pandemic, with new cases climbing fast. The country counted over 4,000 new cases for the first time in the last three months. Amid the domestic crisis of the COVID-19 pandemic, India has earmarked USD 26 billion to curb rising prices and record inflation.

India has extended financial aid assistance to economically-decrepit Sri Lanka by deferring loans worth USD 1 billion. In addition, India sent energy supplies (diesel) to Sri Lanka. The economic downturn of the latter has led to political and social crises. As a result, Colombo lacked essentials such as food, fuel, and medicines in May.

Prime Minister Narendra Modi visited Lumbini, the birthplace of Gautam Buddha in Nepal. Modi offered prayers at the sacred Maya Devi temple on the occasion of Buddha Purnima. India views Nepal from the prism of being within its geostrategic ambit and desires to reduce Chinese influence in Kathmandu.

India appointed ambassadors to Nepal and Bhutan in May. Following PM Modi’s visit to Nepal, the Ministry of External Affairs announced the appointment of Naveen Srivastava. He is known as a strong China hand and handled the East Asian Desk before being appointed Nepal ambassador. Ambassador to Bhutan appointee Sudhakar Dalela is also an old China hand. The appointments reflect New Delhi’s efforts indicate that China views its neighborhood from a security perspective and intends to counter Chinese influence in the region.

Modi embarked upon a trip to Japan to attend the Quad Leaders’ Summit on 23 May. Modi spoke of India’s role in the maritime domain as the Quad made progress on maritime domain awareness (MDA). He described Quad as a ‘force for good’.

However, the Quad continues to remain divided on Russia. India is reluctant to criticize Russia, India’s time-tested strategic partner. Amid the ongoing conflict, India-Russia bilateral trade has witnessed an exponential rise. India is not just purchasing cheap oil from Russia but is also procuring other commodities such as fertilizers. Moscow is now the fourth-highest supplier of crude oil to New Delhi. As two major powers, India and Russia are consolidating their traditional partnership through an enhanced trade relationship that is only bound to grow. India also continues to have a different position in Moscow than the European Union. India’s Minister of External Affairs, S. Jaishankar, was quite critical of European hypocrisy over procuring oil from Russia to meet India’s needs. He said that Europe’s purchases of oil from Russia far outweigh India’s. However, the Quad is firmly united in its view of the global threat posed by rising Chinese influence.