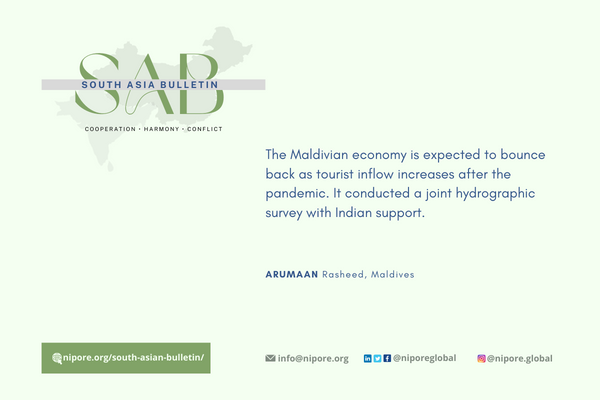 The Maldives is at a high risk of dollar reserve depletion by 2023. The primary causes are Covid-19’s impact on the tourism industry, soaring global fuel prices, and rising borrowing costs. Maldives has USD 829 million in reserve. However, the national debt, at USD 5.9 billion in 2021, has ballooned to USD 6.4 billion in the first quarter of 2022.

Minister of Finance, Ibrahim Ameer, assured that the Maldivian finance is in better shape now than in the last three years. The economy is growing with the arrival of tourists. The Maldives is expected to grow at 13-18 percent in 2022.

Maldives and India conducted the second joint hydrographic survey of Maldives, covering 6500 nautical miles. The survey is critical for the Maldives to update the Navigational Charts/Electronic Navigational Charts for ship safety in several areas of Maldives and enhance Blue Economy. The first phase of the survey started in 2021. Some of those areas were not surveyed since 1853.

The joint survey resulted from India’s policy of supporting the Maldives to set up Hydrographic facilities. India provided the Maldives with hydrographic survey equipment in 2021 and 2022. The joint survey will enable economic development, defence, security, coastal zone management, environmental protection, and scientific research.

President Ibrahim Mohamed Solih sought approval from the parliament to join the International Islamic Trade Finance Corporation (ITFC). Maldives is not a member of ITFC. Yet, ITFC has provided financial assistance to the Maldives since 2005. ITFC aims to advance trade among members of the Organization of Islamic Cooperation (OIC). The Russian invasion of Ukraine has adversely impacted Maldivian tourism. The two countries jointly accounted for 14 percent of tourist arrivals between January to March of the current year. Despite this, Maldives condemned the Russian invasion of Ukraine at the United Nations General Assembly (UNGA) vote. Furthermore, the Maldives has reiterated its firm belief in principles of respect for sovereign states and sovereign equality. Yet, Maldives has taken a cautious approach to enforcing the sanctions imposed by the West in the aftermath of Russian aggression in Ukraine. 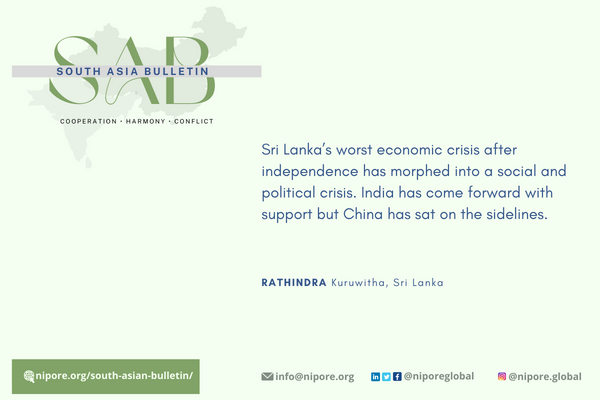 Prime Minister Gotabaya Rajapaksa’s disastrous policies, such as significant tax concessions soon after his ascension, the decision to go fully organic overnight in 2021, and the soft peg of the Sri Lankan rupee exacerbated the problem.

Things took a disastrous turn for the worst on 9 May when Rajapaksa loyalists attacked peaceful, anti-government protestors at Galle Face Green, Colombo. The protesters had earlier convened at Prime Minister’s official residence near Galle Face and had been egged on by several government parliamentarians.

Following the government crackdown, many citizens, mobilized through social media, attacked pro-Rajapaksa mobs that had arrived in Colombo. Many Rajapaksa supporters who took part in the assault of peaceful protestors in Galle Face were attacked while returning home. Over 150 properties, mainly belonging to politicians were burnt, and angry mobs killed several politicians. Following the widespread violence, Prime Minister Gotabaya Rajapaksa, the president’s brother, resigned on the same day. Other ministers followed suit.

President Rajapaksa’s hold on power was increasingly more tenuous. Opposition parties were not keen to form a unity government under the president.

On 12 May, the president appointed the former Prime Minister and the leader of the United National Party (UNP), Ranil Wickremesinghe. The following days saw the appointment of a Cabinet of Ministers comprising members of Rajapaksa’s Sri Lanka Podujana Peramuna (SLPP) and some defectors from the Sri Lanka Freedom Party (SLFP) and the Samagi Jana Balawegaya (SJB).

Wickremesinghe made a statement on the state of the Sri Lankan economy on 29 May, in which he promised five finance committees and ten oversight committees to resolve the economic and political crisis faced by the country. He also pledged to introduce checks and balances to the powers vested on the executive president through a 21st constitutional amendment.

Sri Lanka’s dependency on India continued to grow in May, especially concerning the fuel supply. Sri Lanka spends over USD 500 million on fuel, a cost she can’t afford to bear. Some Sri Lankan media reported that Indian assistance was worth 6 billion US dollars in the last six months.

Meanwhile, China, one of the leading financiers of successive Sri Lankan governments, has sat on the sidelines during this crisis. China pledged 76 million US dollars in assistance and shipped large quantities of medicines and food but has not offered loans or a credit line. It comes despite Sri Lankan requests to China for a loan of USD 1 billion and a credit line of USD 1.5 billion.

Sri Lanka suspended external debt repayments on 12 April and announced a plan to restructure its debt. The country is now attempting to restructure over USD 12 billion in overseas debt (total external debt of USD 51 billion). In late May, Sri Lanka hired heavyweight financial and legal advisers Lazard Freres and Clifford Chance to help renegotiate debts. Meanwhile, most Sri Lankan bondholders have appointed negotiators Rothschild, who is reputed to be extremely unwilling to accept a haircut. Sri Lanka has pinned its hopes on International Monetary Fund (IMF) assistance. However, given that this may take a few months, Sri Lanka needs to find bridge finance. So far, only India has stepped in.

It has become a commonplace phenomenon for the governments around the world to borrow money from outside to support their activities. When they borrow the external money, the governments are liable to pay back the borrowed amount as per the terms and conditions agreed with the lenders. This thus borrowed money is called as the government debt (or public debt or national debt or sovereign debt). Depending upon from whom the states borrow money, the debt can be classified as either internal debt (lenders are within the respective country) or external debt (lenders are located outside of an economy). In addition, considering repayment plans, debt is further classified into three categories namely short-term (repayment due date within one year or less time), mid-term (repayment due date vary between 1-10 years), and long-term (repayment due date remains more than 10 years). In general, the governments become liable to debt by issuing their respective government bonds and bills.

STATUS OF THE GLOBAL DEBT

As per the IMF’s 2019 estimates, in nominal terms, the global debt has exceeded US$ 184 trillion – equivalent of more than 225 percent of global GDP in year 2017. This means, global debt per capita now stands at more than US$ 86,000. Of the US$ 184 trillion global debt towards the end of 2017, about ⅔ is private debt and rest is government debt. As per the IMF’s Global Debt Database, the total global government debt has hit a record high US$ 69.3 trillion. The United States, China and Japan alone account for more than half of global debt now. IMF has also found that, since 1950, the private debt has skyrocketed and rose by more than three times. Overall, for 2017, IMF has classified 190 global economies into three categories – Advanced, emerging market and low-income developing – depending upon those economies’ debt profiles. Overall, there was a decline in public debt and marginal increase in public debt in advanced economies. Similarly, emerging market economies continued to borrow money from the public and private sectors. Finally, low-income developing countries saw a rise in public debt.

Our analysis, using the recent IMF data, shows an overall a healthy status of economies in South Asia, Southeast Asia and China.

Across Southeast Asia, Brunei Darussalam remains the healthiest economy in terms of debt to GDP ratio while Singapore stands in the very high-risk level. Rest of the economies in this part of the world remains in moderate-risk zone. Myanmar, once possessed very high-risk level of debt to GDP ratio in 2005, has improved a lot in terms of handling government debt and the current ratio lies below 40 percent.

In China, the Mainland China used to have low-risk level of debt to GDP ratio earlier. In 2005, the ratio was only 26.1 percent. However, after the Global Financial crisis, the ratio is on the rise. China Mainland, after remaining in the moderate-risk levels for almost one decade, has now entered into the high-risk level. Hong Kong SAR, however, possess very healthy debt to GDP ratio, which now stands at 0 percent. In the case of Taiwan, the economy continues to have a moderate-risk level of debt to GDP ratio and the projections for year 2024 indicate the economy would bounce back to a healthy ratio after 5 years.

In concluding remarks, we acknowledge that analysis of single component of these economies’ economic health does not represent complete pictures of these countries economic status. Thus, in coming days, we will be working on other key aspects of public finance issues from these countries to make our analysis more inclusive.