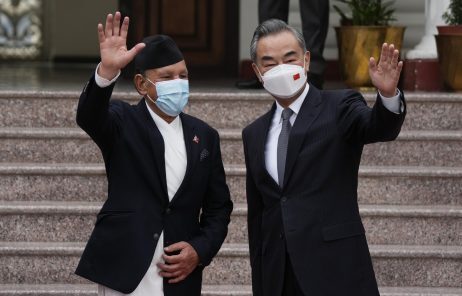 The column originally appeared in The Diplomat on 25 August 2022. Please read the original article here.

In a subtle warning, she reminded Nepal that the One China principle was the foundation of Sino-Nepali relations and expressed hope that Kathmandu would continue to abide by the principle and support China’s legitimate interests. Hou also urged cooperation to “defend each other’s sovereignty, security and territorial integrity.”

Then on August 5, Hou met with Nepali Home Minister Bal Krishna Khand. In the meeting, Khand reassured the Chinese envoy of Nepal’s position on the One China policy. Nepal would not allow any forces to use Nepali territory for “anti-China separatist activities,” he said.

This was followed by a hastily arranged trip of Nepali Foreign Minister Narayan Khadka to Beijing on August 9-11 at the invitation of China’s State Councilor and Minister of Foreign Affairs Wang Yi. Both countries billed his trip as a return visit in the wake of Wang’s visit to Nepal in March.

Khadka’s visit also followed two high-level Chinese visits in recent months. However, the timing and both countries’ statements during and after the visit indicate that Pelosi’s Taiwan visit was a critical factor.

Nepal frequently reiterates its commitments in support of the One China policy and “not allowing Nepali land to be used against Chinese interests.” Prime ministers, foreign ministers, foreign secretaries, and others in leadership positions across time and political parties have restated these commitments to the Chinese. Nepali Foreign Policy 2077 also codifies the latter. As Hou stated, these are the foundations of China-Nepal relations.

There is little doubt that Nepal is sincerely committed to these principles and policies. Unfortunately, Nepal’s understanding of the implications of those principles is less clear-cut.

The implications of the One China principle are relatively easy to understand. Under the principle, Nepal (as do most countries worldwide) believes the People’s Republic of China to be the sole representative of China. In that context, Tibet and Taiwan are parts of China. Thus, Nepal has helped repress the political activities of the Tibetan refugees because China considers the Dalai Lama a separatist.

The implication of Nepal’s second commitment — i.e. not allowing its territory to be used for activities that could undermine Chinese interests — is more complex. The principle is sensible but requires an understanding and agreement between Nepal and China on what legitimate Chinese interests are.

Nepal’s lack of a shared national understanding allows for ad hoc decision-making. Also, not all of Nepal’s interests align perfectly with Chinese interests.

The Millennium Challenge Corporation (MCC), a $500-million grant program from the U.S. to build transport and energy infrastructure in Nepal, tested the principle. Beijing was fiercely opposed to Nepal ratifying the agreement and vocal in raising its concerns. Experts in Nepal were bitterly divided over whether Chinese security concerns regarding the grant were legitimate. Eventually, Nepal went ahead with the ratification, displeasing Beijing. Nepal has sought to reassure Beijing that its interests would not be harmed.

In July, Nepal wrote a letter to the U.S. government rescinding the State Partnership Program (SPP), an exchange program between an American state’s National Guard and a partner foreign country. Nepal and the Utah National Guard signed the SPP in 2019. In Beijing’s perception, the agreement is part of the U.S. Indo-Pacific strategy.

Despite American clarifications that the SPP is not a security or military alliance, Nepal decided to withdraw from the agreement to address Chinese sensitivity on the issue.

Nepal may have a rationale for both decisions, but they point to the ad hoc nature of understanding what constitutes actions against the interest of its neighbors. Such behavior opens the door for influence peddling or even bullying, especially given the meek nature of Nepali bureaucrats and political leaders vis-à-vis their Chinese counterparts.

Additionally, the need for Nepal to regurgitate those principles in every meeting with Chinese leaders indicates China’s insecurity over developments in its neighborhood. Beijing may also be justifiably concerned with Nepal’s ability to implement the principles, though it has praised Nepal’s efforts to limit the activities of Tibetan refugees.

Either way, it is high time that foreign and security policy stakeholders in Nepal reach a common minimum consensus. It would help Nepal engage China on an equal footing. At the same time, it will clarify what Nepali “red lines” are to Beijing. Without such understanding, Nepali policies will continue to be ad hoc and reactionary.