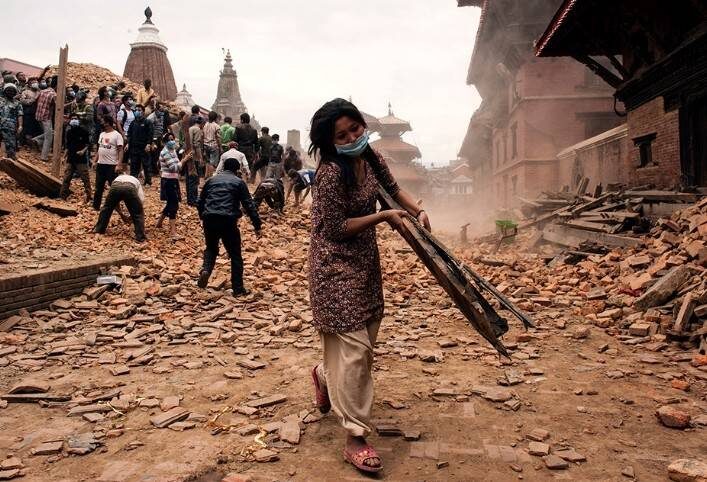 NRC0010 – Nepal Earthquake 2015 at 4: Lessons and Recommendations for Developing South and Southeast Asia

Nepal Earthquake 2015 at 4: Lessons and Recommendations for Developing South and Southeast Asia

It has been a little more than four years since the massive 7.8 Richter Scale Earthquake hit Nepal on April 25, 2015. Concerted efforts have moved to post-disaster reconstruction phase which, however, is not progressing smoothly. A series of lessons and recommendations can be drawn from Nepal’s experiences for the developing South and Southeast Asian countries that, to a large extent, share the vulnerability to disasters and face the similar potentiality of the problems.

On 25 April 2015, a 7.8 magnitude earthquake struck Gorkha, Nepal, followed by a 7.3 magnitude aftershock, resulting in death of more than 8,800 lives and injury of thousands of people. The earthquake also damaged over 800,000 buildings and monuments, amounting the loss of staggering USD 7 billion. After the immediate relief, concerted efforts moved to the post-earthquake reconstruction, marked by the establishment of National Reconstruction Authority (NRA) and Nepal Risk Reduction Consortium (NRRC).

Given the fact that developing South and Southeast Asia are regions in Asia where disasters often occur including tsunami, earthquake and volcanic eruptions among others, it would be relevant to look at Nepal’s case in the post-earthquake reconstruction in which the bottlenecks are putting the concerted efforts in dilemma and the resulting lessons, I think, are useful for concerned developing countries across the Region.

However, Nepal has long been suffering from unstable domestic politics. Prior to the 2017 local election, Nepal had major such election in in 1999 and was disrupted by the decade-long Maoist Insurgency that left the local levels with governance vacuum and accountability deficit for two decades. While the local government system was still in the building and was unable to provide enough local information, international humanitarian organizations find it hard to fulfill reconstruction tasks as they have to collaborate with the local government for all related works. Therefore, the reconstruction plan was substantially delayed and caused secondary harms to victims. Such ineffectiveness with an image of corruption also created distrust between the government and the citizens, and also between the government and donors that generated undesirable political and social obstacles.

Local capacity is important for the long-term and sustainable post-disaster reconstruction, given the humanitarian work normally focuses on the immediate and middle terms, as mandated by the International Committee of the Red Cross, the UN’s designated coordinator for international disaster reduction.

However, Nepal, even though it has over 30 million population, does not have sufficient qualified human resources. This is due to the fact that over 2.2 million skilled Nepali youths are employed outside Nepal and the reconstruction demands some 10,000 skilled manpower that includes engineers, foremen, masons, and carpenters and another 40,000 semiskilled workers, of which only 20% can be met by the existing human capacity and the available resources. Knowledge gap is also huge, given earthquake-resistance has never been part of Nepal’s general engineering education. Meanwhile, few active international humanitarian workers, with insufficient indigenous assistance, had to stay longer and couldn’t effectively reach and serve the most vulnerable groups. Their presence also caused a big amount of donations to be spent in administration and coordination without directly benefiting the victims.

A. Reconstruction without Retrofit

In the developing South Asia and Southeast Asia, informal housing is common and even accommodates many more people than the formal housing does. Therefore, reconstruction should be together with retrofit so to be inclusive for the vulnerable victims.

In Nepal, 80% of settlements were referred as “informal”. However, in the reconstruction, those informal housing residents who did not own land and bore loss of housing were locked out from the reconstruction support. Instead, the government spent much time and resources in works that involved reconstructing the fully damaged 600,000 buildings but failed due to the unbearable cost. In fact, many traditionally informal housings stood after the earthquake, protecting lives and properties, though possessing risks of collapsing. The government did not immediately shift to retrofitting, which substantially delayed the shelter provision to victims.

Big data opens a new door for post-disaster reconstruction because of the possibilities it provides in visualizing, analysing, and predicting natural disasters. However, this brings challenges to the developing South and Southeast Asia in terms of collecting, storing and analysing data due insufficient regular capacity of professionals and resources.

In Nepal’s reconstruction, the long-time absence of the effective local government led to the missing of the basic data about demographics, geography and households. The low levels of electrification and electronization caused from frequent load-shedding also constraints the maximal usage of the data in the process. Without the guiding data, a phenomenon appeared that humanitarian organizations intensively worked in the most accessible regions where they even started to build hotels, and meanwhile, left the less accessible area stranded.

Disasters are catalysts for change as they are increasingly recognized as opportunities to direct and navigate change towards aspired outcomes, such as sustainable development goals. Even though Nepal government published a vision, “well-planned resilient settlements and a prosperous society”, for the reconstruction, the country failed to leverage the reconstruction and rather use it as an opportunity to bring about needed changes across disaster affected communities.

Due to the insufficient number of required skilled professionals and also ineffective mobilisation of local personnel, many of the humanitarian donations didn’t reach the real victims. Rather, it was spent on salaries, accommodation and transport for the I/NGO expatriates themselves. Nepal Red Cross Society had spent USD 2.5 billion by 2018 in devastated districts, but the noticeable results of those investments are yet to be seen. Without employing local communities (people) and services, thus spent money cannot be recycled in the local economic system, and therefore cannot boom the local economy.

The policy recommendations proposed below prioritize the works related to knowledge creation and sharing, planning with local communities and building synergy with the partners’ strengths, so to focus more on demand-driven humanitarian efforts that are in line with today’s New Humanitarianism movement.

In short term, reconstruction process should involve local people and services. Moreover, this work should involve the local service providers so as to complement reconstruction works with indigenous knowledge, needs, perceptions, behavioural patterns. Then, the stakeholders should come up with local-oriented, people-centered and disaster-resistant plan and design the overall implementation plan. This plan should prioritise the basic needs of the local people – such as shelters and food. This participatory process can mobilise the ordinary victims to proactively recover from the post-disaster traumas through employment and mutual help, and avoid relying too much on the pre-existing power structure to mis-prioritize the less vulnerable over the most. Meanwhile, an effective government and judicial system should be recovered first, in order to maintain the social order, dissimilate information and deliver the service.

For mid-term activities, reconstruction process should employ data-collection and employment of technologies and equipment to better monitor, analyse and implement the reconstruction works. These should be done after the approval and proactive support of the local stakeholders while also following the compliance requirements of respective local governments’ existing laws and regulations. A disaster-resistant code of building should also be strictly implemented in the rebuilding process, with prioritization of retrofitting the standing buildings. Meanwhile, the technology and equipment transfer and capacity building should be started that ensures creation a sustainable and self-reliant reconstruction system and the process.

In the long term, disaster-resistance and -prevention should be integrated within local school and college curriculums – General subjects and the STEM (science, technology, engineering and mathematics) subjects. Also, a more holistic and inclusive awareness campaign should be developed and put in place. In addition, a few disaster risk reduction teams comprising professionals from across professions and sectors should be formed autonomously from the government system with regular international channels for exchange and cooperation. This will help the concerned stakeholders to put aside their political differences and prioritize work on disasters and the related events. This, in a way, helps to avoid the potential negative impacts of local policy and political instability. Finally, a comprehensive contingency plan – that involves key people from the local governments, local communities, technocrats and the disaster experts – should be established and updated regularly, together with contingency reserve resources.

Publisher’s Note: The Nepal Institute for Policy Research (NIPoRe) publishes occasional well-researched research commentaries on policy issues representing Nepal and countries in South and Southeast Asia authored by researchers around the world to inform and generate policy debates among concerned professionals and stakeholders in Asia.