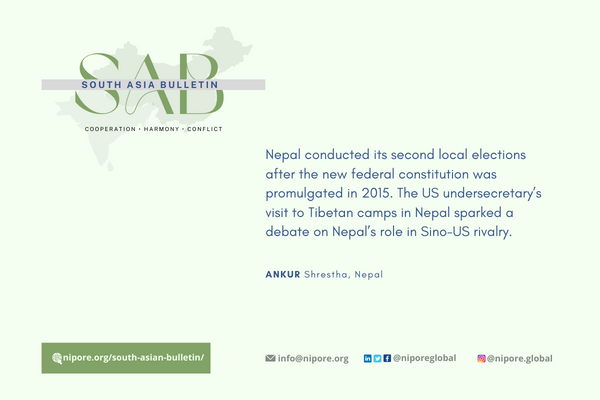 Nepal held local elections on 13 May. It was the second such election after Nepal went into the federal governance structure. A few results were surprising as independent candidates won top mayoral positions in major cities like Kathmandu metropolitan city (the capital) and Dharan sub-metropolitan city. Nepali Congress topped the charts among the ruling coalition of five parties, and the Communist Party of Nepal (Maoist Centre) did well to come in third. The main opposition party, the Communist Party of Nepal (United Marxist Leninist), came second though most expected the party to perform better. Nepal will also hold its federal elections later this year in November.

A Tara Air flight carrying 22 people crashed into a mountain at an altitude of about 14,500 feet. It was Nepal’s 19th plane crash in 10 years and Tara Air’s 10th fatal one during the same period. The European Union (EU) has barred Nepali airlines from European airspace since 2013 owing to poor safety records. Meanwhile, Prime Minister Sher Bahadur Deuba inaugurated Nepal’s second international airport in Lumbini, the birthplace of Gautam Buddha.

On the occasion of Buddha Jayanti (Buddha’s birth, nirvana, and death all were on the same date), Indian Prime Minister Narendra Modi visited Lumbini, the birthplace of Buddha. The visit was Modi’s fifth to Nepal, and he had visited Hindu religious sites in his four previous visits. Nepali Prime Minister Sher Bahadur Deuba and Modi witnessed the exchange of six MOUs relating to the power and education sector. One was between India’s Satluj Jal Vidyut Nigam Ltd and Nepal Electricity Authority (NEA) to develop and implement the Arun IV hydropower project. Additionally, Nepal has signed agreements to sell up to 364 MW of electricity in the open market in India.

Nepal-India relation has been hot and cold during Modi’s reign. In 2014, Modi became the first Indian prime minister to visit Nepal in 17 years and received adulation across the board. However, the Indian blockade of Nepal in 2015 and overlapping territorial claims have tested the relations. Nevertheless, the relationship has recently improved, especially in energy connectivity.

Deuba inaugurated Gautam Buddha International Airport earlier that day, but Modi chose to land on a custom-built helipad 16 kilometers away. Many analysts argue that Modi snubbed the airport because it was built by a Chinese contractor (though financed by the Asian Development Bank). Nepal has the daunting task of balancing Indian and Chinese engagement and interests in Nepal.

At the foreign secretary-level, the 14th meeting of the Nepal-China Diplomatic Consultation Mechanism took place. Both sides talked about cooperation for mutual benefits and the further promotion of bilateral ties. However, China expressed displeasure at the US Undersecretary of State for Civilian Security, Democracy and Human Rights, Uzra Zeya’s visit to Tibetan refugee camps in Kathmandu (more on this below).

Zeya, the United States under secretary for civilian security, democracy, and human rights, visited two Tibetan refugee camps in Nepal. She is also the special coordinator for Tibetan issues. She went forward with visiting refugee camps despite Nepal’s reservations, though Nepal formally feigned ignorance of the visit. Nepal is home to over 13,000 Tibetan refugees and is a sensitive issue in Nepal-China relations. Nepal ascribes to the one-China policy, which states Tibet and Taiwan are integral parts of China, ever since diplomatic relations were established.

To assuage Chinese concerns, Nepal re-expressed its commitment to the One-China policy. However, the amalgamation of geopolitics and human rights principles makes Nepal’s handling of Tibetan refugees tricky. It has also been an arena for Sino-US competition in Nepal.